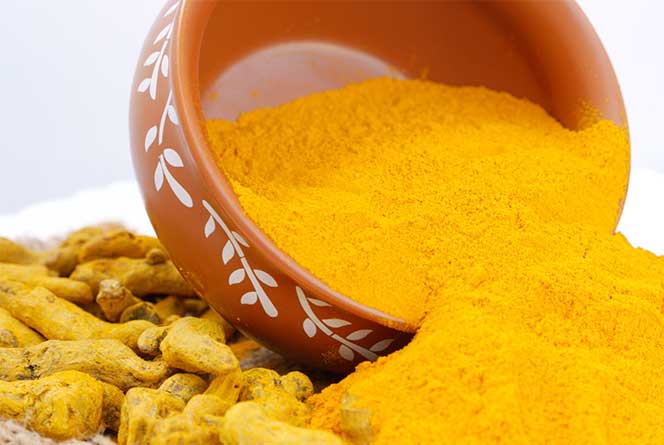 While the root of turmeric strongly resembles ginger root, each rhizome tends to be slightly smaller and the outer color of the skin darker. The plant has a large root system and flowers above, with a short stature rarely reaching more than 2 feet tall. Its Latin binomial name is curcuma longa.

We will dive more into the way in which turmeric made its way throughout the world a bit later in this post. In the ancient world, turmeric passed through the hands of many different cultures and thus picked up different monikers.

The name turmeric is likely derived from a term similar to “kurkum”- different versions of which are found in many of the different languages of the cultures touched by the herb as it traveled on trade routes.

Amazingly, the related term that turmeric’s name stems from has origins in Yiddish, Korean, Catalan, and an assortment of other Northern European languages. It was previously thought that the English word turmeric had roots with the latin “terra merita”.

Now scholars agree that it’s more likely that the name can be attributed to the history of the herb’s journey throughout Asia and Europe in ancient trade routes. Kurkum and its related terms in different languages are connected by the yellow color of the herb.

First Known Use of Turmeric

In India, turmeric played a significant part of Vedic culture and its bright orange hue was associated with the religious figure Lord Krishna. It was an important spice for flavoring food and dying clothing with its bright pigments. The earliest known use of turmeric in India in the 4th millennium BCE but it’s likely that humans used it well before that time.

Cultural Significance of Turmeric in India

Turmeric was always an important part of life in India. In fact, has more than 53 different names in Sanskrit, each one denoting a different use for many needs and situations. Here are some of the names that are associated with turmeric:

Sahdeo Prasad and Bharat B. Aggarwal

Looking at all of the different ways people referred to the plant, it’s easy to see the profound cultural significance that turmeric had in India, not just as part of social life, but also for its medicinal purposes.

Ayurvedic Medicine is the traditional herbal system for health and wellness from India. Similar to other kinds of traditional Asian herbalism, this system focuses on the whole body and the whole person. Foods and herbs play the same role as medicine and are a key part of the complex holistic system.

The doshas in Ayurveda, are the three body types that most people will fall into. These categories are kapha, pitta, or vata which dictate the body shape, temperament, and natural temperature range. A basic understanding of one’s dosha is key to finding balance and health.

Turmeric is an interesting herb in Ayurveda because in the correct amounts, it’s thought to bring balance to each one of the doshas. It can have benefits for the digestive system, especially for those in the kapha dosha.

Turmeric Spreads Across the World

It’s thought that trade out of India started in ancient times, possibly 2,500 years ago. The trade routes reached as far as Asia Minor, in the areas now known as Iraq and Iran. It’s likely that the early Sumerian culture had access to turmeric among other precious goods from India.

As time went on, turmeric found its way into Africa making it as far as the Eastern horn in what is known as Mauritania today. Eventually, turmeric was being traded down into sub-Saharan Africa.

It’s thought that turmeric had made its way to China by around the 7th century, where it was quickly adopted in food and medicine.

In Traditional Chinese Medicine, Turmeric (Jiang Huang) is thought to stimulate and support the flow of blood in the body. The herb is classified as warm and is helpful for balancing conditions where the body has too much cold.

For people who have a low amount of Yang energy, or for those who have too much Yin energy might be prescribed Jiang Huang to help balance the heat and cold in their bodies. It’s associated with the spleen (all herbs in TCM are related to major organs or systems in the body) and is thought to boost the overall flow of Qi.

Scientists first identified some of the chemical compounds found in turmeric found during the early 1800’s.

This time was a turning point in the history of chemistry as a whole, with scientists looking at plant and animal materials on a cellular level and identifying the active chemical compounds for the first time.

The 19th century marked a turning point in medicine and chemistry, because scientists were able to start the process of moving away from using raw materials as medicine to create formulations for specific needs.

Pierre-Joseph Pelletier was one of the most notable chemists from this time. He along with other scientists were the pioneering force behind this new study of chemistry. His particular area of focus was on plant alkaloids, and along with his partners, he helped discover caffeine, strychnine, and other major compounds that are still used today.

Turmeric was known to Pelletier primarily because of its use as a dye for fabrics and other uses. He, along with another chemist, A. Vogel were the first to isolate the primary compound in turmeric, which they named curcumin.

Throughout the 1800’s, several chemists worked with turmeric but were not able to show the structural formula for curcumin. In 1910, the chemists Milobedzka and Lampe were the first to identify the chemical structure and its formula. By 1913, the same group who had first identified the formula were then able to synthesize it.

The next major turning point in understanding the compounds found in turmeric came much later in 1953.  Chemist K.R. Srinivasan used a process called chromatography, which separates the components within a substance.

Since then, turmeric and curcumin have been the subject of hundreds of studies to understand it’s complex nutrition.

Other Chemical Compounds from Turmeric

In addition to curcumin, turmeric has been found to be rich with a number of other chemical compounds. Turmeric also contains alkaloids, polyphenols, triterpenoids, sterols and even more compounds. The plants rich chemical makeup is likely the reason behind its alleged benefits in so many areas of human health and its use as a traditional folk remedy.

Turmeric is probably best known for its purported anti-inflammatory properties. Different preparations of turmeric have shown positive benefits, specifically for those with illnesses related to inflammation in the body.

Research has shown curcumin is a safe ingredient that regulates the systems that create inflammation in the body, down to the enzymes, proteins, and cytokines.

There are high amounts of antioxidants found in turmeric and curcumin. In fact, the ingredient has been shown to also promote antibacterial and antiviral functions in the body. Beyond the natural levels of antioxidants, curcumin is also thought to be an immune modulator, meaning that it actually supports the function of the immune system as a whole.

Turmeric’s heart health benefits may also be attributed to its antioxidant and anti-inflammatory properties. The primary way that it’s thought to support the heart is though supporting healthy inflammation response in the body.

When you consume turmeric, one of the ways it can support digestive help is by the way it works in the gut. Research has shown that curcumin supports the function of gut barrier by keeping bacterial levels in check and of course, with its ability to support healthy inflammation.

Turmeric may be effective at soothing coughs. Another way that it may support the lungs and the respiratory system is by breaking down mucous.

Turmeric is so successful as an everyday remedy for respiratory problems, that its active ingredient curcumin is the focus of many studies to help scientists understand how it might be used in future therapeutic treatments.

One surprising possible benefit of turmeric and curcumin is its supposed support for healthy blood sugar levels. It has been used for this very purpose for thousands of years in traditional Eastern Herbalism and Ayurvedic medicine. Modern researchers found that turmeric may be able to decrease glucose in the blood and balance sugar levels.