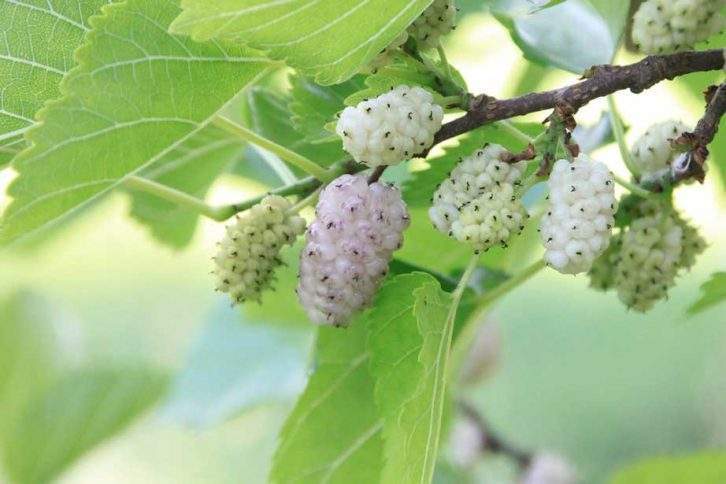 The Healthy Benefits of White Mulberry

Many Americans have memories of purple stained hands and feet on summer days from eating mulberries. Mulberry is well known in North America, but you can find different species of it all over the world.

White mulberry leaf is growing in popularity in North America because of its health benefits. While mulberry fruit from the black mulberry is treasured as a sweet treat, the leaves of the White Mulberry species are another reason the plant spread across the world.

Morus Alba is native to ancient China where it was revered in herbal medicine for its health benefits and as the main food for silkworms. The silk trade was key to China’s role as an economic force in the ancient world.

Sāng Yè is the name for white mulberry leaf in traditional Chinese Herbalism. It’s a “cooling” herb, thought to strengthen the Wei Qi which is the outer defense system of the body. Sāng Yè brings balance to emotions and helps govern the systems related to the Liver and Lungs.

When the Romans invaded Britain, they brought mulberry trees with them. The leaves served medicinal purposes, such as treating diseases of the mouth and lungs. Henry VIII even had a Mulberry tree planted in his Chelsea estate. Later, King James I decided that Britain should compete with France in silk-making.

In order to accomplish this, he brought over ten thousand mulberry trees to feed the silkworms, planting some in a garden near Buckingham Palace. Yet, this project ultimately failed as he brought the wrong kind of mulberry tree.

White Mulberry in the United States

The British introduced white mulberry to North America before the American Revolution. White mulberry was first brought to America in a failed attempt to establish a silkworm industry. Since then, several varieties of this tree have spread through North America. They grow in unattended areas and open rural habitats.

In modern times, researchers have been interested in the purported health benefits of white mulberry leaf. Due to its complex chemical make-up, researchers have found that WM might be beneficial for its health supporting properties.

Modern research has shown how potent the herb is and how it supports and nourishes the human body. Morus alba has been used as a folk remedy for thousands of years, and this research helps explain why.

Top Benefits of White Mulberry Leaf According to Modern Science

White mulberry leaf has many properties that may help support healthy blood sugar. These include 1-deoxynojirimycin (DNJ), which prevents the absorption of carbohydrates in the gut.

Herbal tea is the best way to enjoy the benefits of white mulberry. White mulberry tea is a delicious treat that anyone can enjoy and its healthy option which makes it even better!

With the abundance of the plant all over the world, you might be able to find the leaves right in your back yard.However, to protect yourself from unknown pesticides or other toxins from the soil, it’s best to purchase a brand of white mulberry leaf tea that’s been grown organically.

This herb contains powerful compounds, used and respected for centuries. It’s revered by modern medicine for its many health-supporting properties. We are just beginning to understand the herb’s potential from a scientific perspective. But anyone can enjoy a delicious cup of white mulberry tea for it’s everyday health benefits.