The Benefits of Chrysanthemum Tea- The Golden Lotus

Have you ever gotten tea at a Chinese restaurant? Chances are that it was chrysanthemum tea.

Chrysanthemum tea is by far one of the best-known teas originating in Asia. The herb is known as Ju Hua (菊花) in Chinese. The flowers have spread all across the world and have been cherished by many different cultures. Chrysanthemum has many health and wellness benefits, is naturally rich with vitamins, and minerals. It’s probably best known for its flavor.

Chrysanthemum flowers of all varieties are beautiful, fragrant and loved by many different cultures throughout the world. It wasn’t just their sheer beauty that helped the species thrive for thousands of years on earth, it was also used as a health remedy.

While it’s thought that the first use of the flower as a medicinal herb was somewhere around 1500 BC, there is no doubt that it’s use goes back much farther into antiquity in China and other parts of Asia.

Cultural Significance of Chrysanthemum in China

Chrysanthemum has long been a symbol vitality and longevity in China. During the Han dynasty, people drank chrysanthemum wine during the Double Ninth Festival. This festival, still held on the ninth day and ninth month of the lunar calendar, celebrates the fall harvest and ancestors.

As a fall blooming flower, chrysanthemum is a hardy plant that starts its life when most other plants are dying. In fall, it serves as a reminder to stay strong and full of life as the world begins to darken.

Chrysanthemum is native to Asia, with its first use starting in China then spreading to Japan. Records show that Japan began using chrysanthemum as a medicinal herb starting near the 8th Century AD during the Nara period.

September 9th is the national day of celebration of the chrysanthemum flower and commemorates the first time a show for different cultivars of chrysanthemum was held back in 910 AD.

Chrysanthemum in Europe and Across the World

Chrysanthemum made its way into Europe by the 17th century. While in Asia, the flower is a symbol of life and vitality, in Europe, the flower became a common for funerals

The flavor profile for chrysanthemum within the context of Traditional Chinese Medicine (TCM) is interesting because it’s both sweet and bitter.

Although “bitter” doesn’t sound appetizing, this quality is important when it comes to foods and herbs in TCM. Bitter foods and herbs have cleansing properties, and for those with stagnant heat or dampness (both terms to describe energy in the body), they can help bring balance. Sweet foods are thought to help the body relax and feel grounded. These soothing herbs and foods help lubricate the body and relax the mind

Chrysanthemum is most closely related to the Liver and Lung Meridians, which are connected systems in the body. With its cooling effect, it’s thought to be most helpful for the kidney and liver, especially when there is a lack of Yin energy.

All of the herbs used by TCM will have different applications depending on the person being treated. One of chrysanthemum’s biggest overall health benefits according to TCM is its ability to support eye health.

By supporting the liver, chrysanthemum helps qi (energy) move throughout the body. Another area affected by the liver is the flow and production of the fluids in the body.

Chrysanthemum Tea Best Drink for Summer According to Traditional Herbalism

Because of its cooling and wind clearing qualities, chrysanthemum tea is one of the best things to drink during summer. Chrysanthemum tea has a delicate flavor compared to many other herbs and it tastes great hot.

For the hot months of the year, try making a pitcher of Chrysanthemum tea, or mixing it with another one of your favorite flavors. Its delicate flavor makes it a great flavor to mix with other teas and flavors.

Vitamins and Nutrients in Chrysanthemum Flowers

Chrysanthemum has a rich array of vitamins and nutrients. It contains vitamin A, niacin, copper, B6, folate, iron, zinc, riboflavin, manganese and potassium.

It even contains high levels of protein and fiber, but you’ll have to actually eat the leaves to get those benefits.

A Chromatographic Study of Chrysanthemum’s Compounds

One study used various chromatographic methods to understand the chemical makeup of Chrysanthemum flowers. The compounds 5-hydroxy-4′,7-dimethoxyflavon, isorhamnetin, quercetin, liriodendrin, and genkwanin had never previously been found in the Chrysanthemum genus. Other compounds found in the flowers include tricin, 4′-dihydroxychalcone, 7hydroxyflavonone, 5,6,7-trihydroxy, (3 beta, 5 alpha, 6 beta, 7 beta, 14 beta)-eudesmen-3,5,6,11-tetrol, just to name a few.

Why Identifying Compounds in Plants is Important

In the case of chrysanthemum and many other ancient medicinal herbs, identifying plant compunds using state of the art science is crucial. This work helps develop future drugs and treatments and at times even identifies previously unknown compounds.

Another aspect of chromatographic screening is that it helps us understand why certain plants have been protected and passed down for generations. More often than not, the folk remedies that ancient people used and still exist to this day have real relevance when it comes to beneficial nutrition and health benefits.

Sesquiterpenes are a class of terpenes, which are aromatic compounds found in plants. A study looking specifically at chrysanthemum due to its use in traditional Chinese herbalism (Ju Hua) found two previously undiscovered sesquiterpenes.

Eye Health- During allergy season, chrysanthemum tea is an excellent option, because it may help soothe itchy red eyes. It’s also great for overall eye health and soothing for dryness.

Skin Health –Rich with vitamins and minerals, chrysanthemum tea is excellent for soothing and nourishing the skin.

Healthy Inflammation Response-Looking at all the amazing compounds, vitamins, and minerals found in chrysanthemum, it’s no wonder that chrysanthemum tea might be an excellent option for soothing and supporting healthy inflammation response throughout the body. 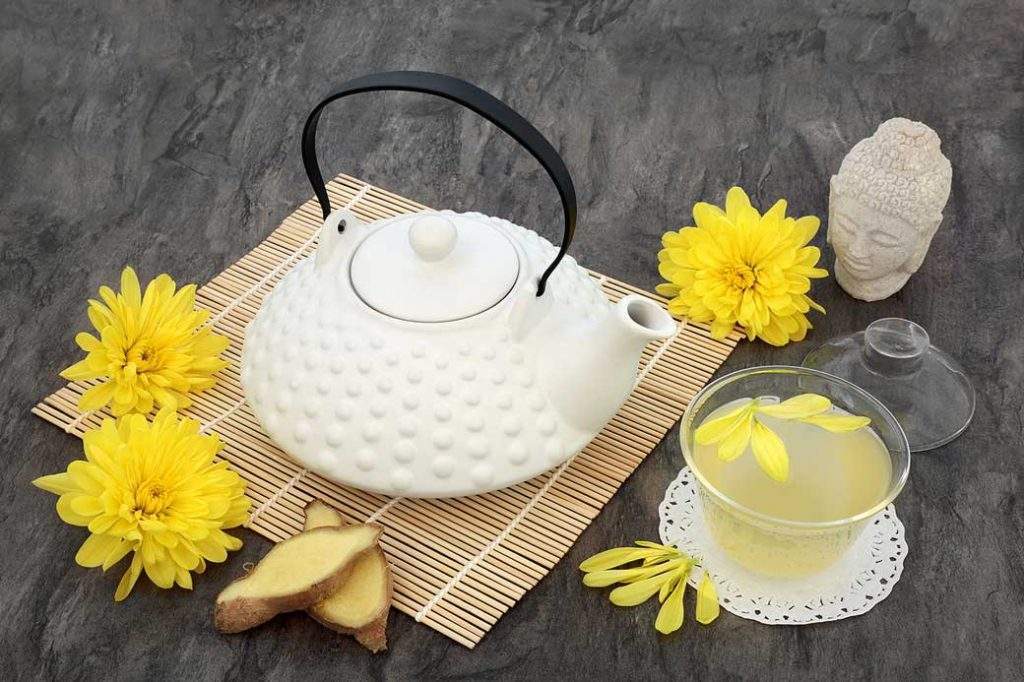 A Study on Bone Health

Another study was interested in the possible benefits of traditional Chinese herbs for the treatment of metabolic diseases. One such bone disease that many people, especially older women, are familiar with is osteoporosis. Using an extract of Chrysanthemum flowers, researchers found that the extract reduced the bone-resorbing activity that causes the weakness of bones in osteoporosis. Specifically, they observed when treated with the extract, osteoclasts (cells that degrade bone) were not able to fully form and interrupted the bone-resorbing activities. While this does not mean that all use of chrysanthemum will fight osteoporosis or related diseases, it does indicate that the extract of chrysanthemum may be used to create future therapies.

A Study on Compounds in Chrysanthemum Tea

Most research related to herbs and plants focuses on compounds extracted from the plants or other kinds of extracts. However, there was one study that actually tested 17 different kinds of commercial dry chrysanthemum teas. Some of the chemical compounds identified in the teas were C-diglucosylapigenin,eriodicyol-7-O-glucoside, and acetylmarein.

Oxford University. (1865). The Chrysanthemum: Its History and Culture (1865). Groombridge and Sons.